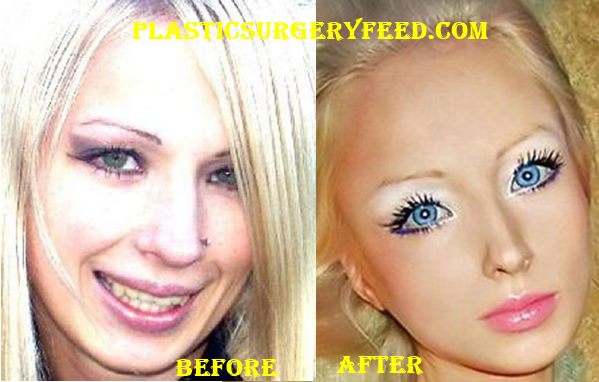 The world has been shocked with the new trend that was called as Barbie Plastic surgery. Being as Barbie is the dream of many women in the world. Famous doll dressed glamorous and fashionable influences the lifestyle of young women. The appearance of Barbie-style dolls become one of the trends in Asia, and later became a global trend. Some women listed change their appearance through a series of plastic surgery and help make up for being such a Barbie.

Women from Ukraine is the subject of conversation on the Internet because of its appearance that resembles a Barbie doll. With the figure of the small-waisted, big breasts, big blue eyes and long blond hair, Valeria regarded as Barbie in real life.

Olga Oleynik often called twin of Valerie Lukyanova because of the similarity face and body shape they have. Just like Valerie, body and face Olga has undergone drastic changes as a result of plastic surgery, it’s just the body of Olga fuller than Valeria.

Anzhelika is one of a young girl who is obsessed to look like Barbie. Although plastic surgery to shrink her waist, body Anzhelika unchanged extreme forms such as Valeria. With a height of 165 cm and weight 41 kg, Anzhelika appearance looks tiny and cute as a doll.