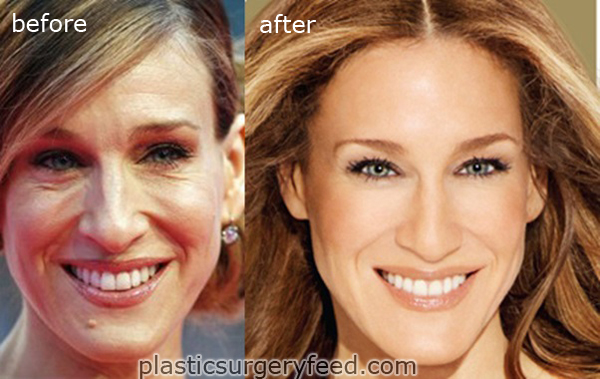 Sarah Jessica Parker has enjoyed a long career in Hollywood, starting in the 1980s with the short-lived cult classic “Square Pegs” as a teen before moving up to more notable roles such as her star-making performance in “L.A. Story” in 1991. Her career arguably peaked with the highly successful HBO series “Sex in the City” which also spawned two feature films.

As with any Hollywood actress, Parker has been the subject of many rumors over the course of her career. The Sarah Jessica Parker plastic surgery rumors have been with her since the early 1990s in one form or another and still persist today, but are they true?

As with most Hollywood actresses, Sarah Jessica Parker has been subject to plenty of rumors about plastic surgery, but the physical evidence seems to be lacking for the most part.

Nose: Comparing photos of Parker from her teen years to today show little to no change in her nose at all. In some photos, it appears that her nose is slightly narrower, but that could be due to makeup, the angle of the photo, and the natural aging process.

Breast Augmentation: Another persistent rumor is that Parker has had her breasts augmented. However, in comparing photos of her from the early 1990s to today, there is no size difference or the usual signs of augmentation which include the round shape of silicone implants. She does put them on display more often in recent years thanks to her choices in more low-cut dresses, but otherwise there appears to be no difference.

Botox: Arguably, this is the most persistent rumor and one that may have the most merit. This is because Parker has managed to maintain a relatively smooth forehead that is more prominently displayed thanks to her hairstyle. However, there are no lumps, unnatural bumps, or changes in her expression that often accompany Botox use. If she has, the procedures have been unusually successful.

There have been no other major rumors about any Sarah Jessica Parker plastic surgery events. She has managed to maintain a prominent status in Hollywood over the years, but has also remained married to Matthew Broderick for well over two decades which is a lifetime in Tinseltown.

Based on the photographic evidence and the lack of any admission or proof, the answer appears to be no. Her nose, forehead, and face appear to be the same while her breasts could have easily enlarged because of motherhood. The old pictures of Sarah Jessica Parker before plastic surgery show relatively little difference in her face apart from eyebrow tweezing, hairstyle, and makeup changes.

While this does not rule out that Parker has had plastic surgery or taken Botox, there is very little physical evidence to suggest that it has occurred. What is obvious is that Parker has been in the public eye since she was a teenager, so naturally there are considerable, natural changes that occur in everyone over the course of 30 years.